£107.77 including VAT in stock
Add to basket
Add All To Basket
See Less Products Show All Products

This project allows you to control IKEA Tradfri gadgets with a Raspberry Pi 400 or Pi 4B from within Node-RED.

Controlling smart devices from a mobile app is OK if you’re happy with the features offered but what if you want more? Perhaps you want to dim the lights and turn the music on using a sensor or be woken up in the morning by your lights slowly increasing in brightness. This is where Node-RED can be extremely useful. Node-RED is a visual editor for connected devices using Javascript to customise the way your devices behave and interact with each other. There’s a whole selection of pre-built device nodes that you can drag-and-drop and wire together or you can create your own. The software package comes pre-installed in RaspiOS for the Pi 400 and Pi 4B!

This project will guide you through setting up Node-RED to control the Tradfri smart devices. Everything you learn in this project can be applied to other smart devices so you can start using Node-RED as a central point for creating your own special effects with them.

Tradfri smart products form a network based on the ZigBee wireless standard and the gateway implements the Constrained Application Protocol (CoAP) for network communication. To get started we’ll install a CoAP client on the Pi. This will enable Node-RED to send CoAP commands to the gateway. The gateway will then relay these commands to the smart devices.

The CoAP client will be installed in /home/pi/libcoap/examples/coap-client.
Information about the CoAP standard can be found here: https://libcoap.net/

Make sure you can control your lights using the IKEA mobile app to test they are all connected and working as expected. You will be able to continue to use the app for control alongside Node-RED.

To run a test, several pieces of information are required:

nmap will return a list of devices connected to the network – our test gateway has a hostname starting GW followed by the Serial Number (MAC address) printed on the bottom of the enclosure – it has the IP address 192.168.1.120

Now we have the credentials, we can use them to send messages to the gateway.

Create the following environment variables in the Terminal substituting your own credentials:

Details of individual devices can be found by using their id in the request:

This returns details about the bulb:

You now have control of your Tradfri network and devices so we can move on to setting up Node-RED.

Node-RED is installed by default in RaspiOS and there are already specialist nodes for Tradfri devices in the Node-RED repository that we will install in our instance.

Documentation for this Node-RED library is here: https://flows.nodered.org/node/node-red-contrib-tradfri 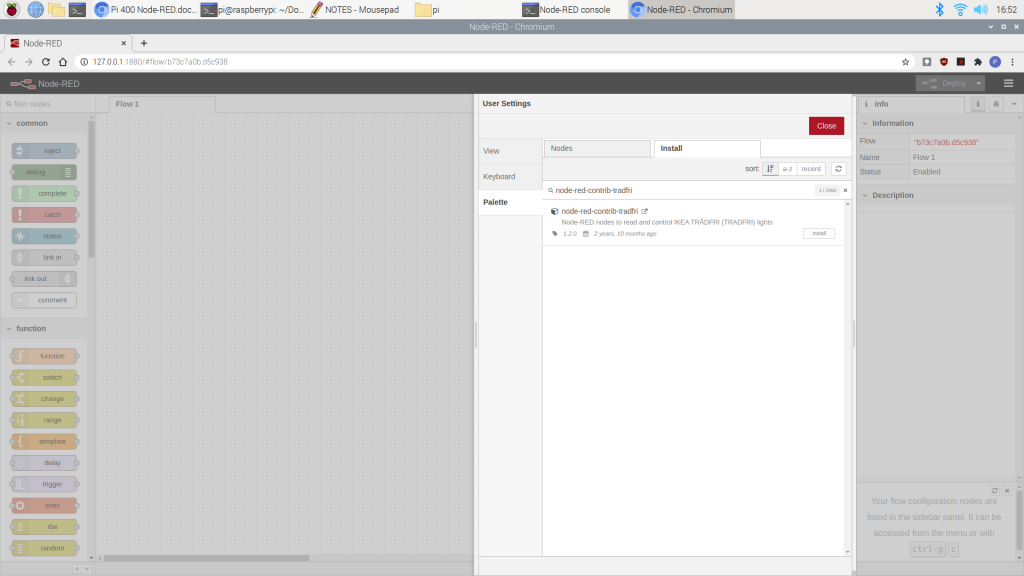 Two new Tradfri nodes will now appear in the Pallet down the left-hand side of the window:

Drag them both onto the Flow. 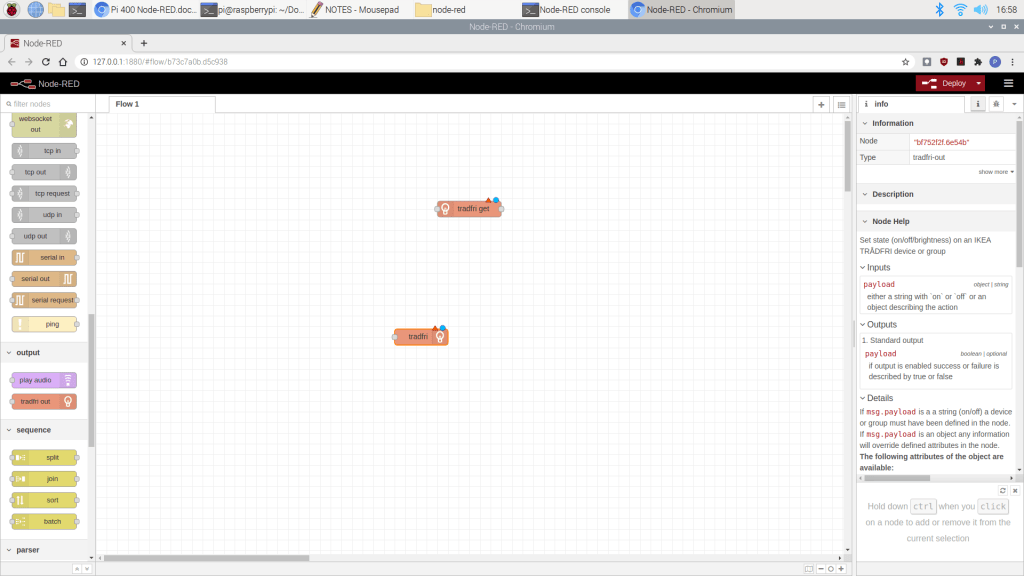 This step configures the Tradfri nodes with the credentials that were obtained in step 2. Use the Tradfri get node which will return details of the devices. 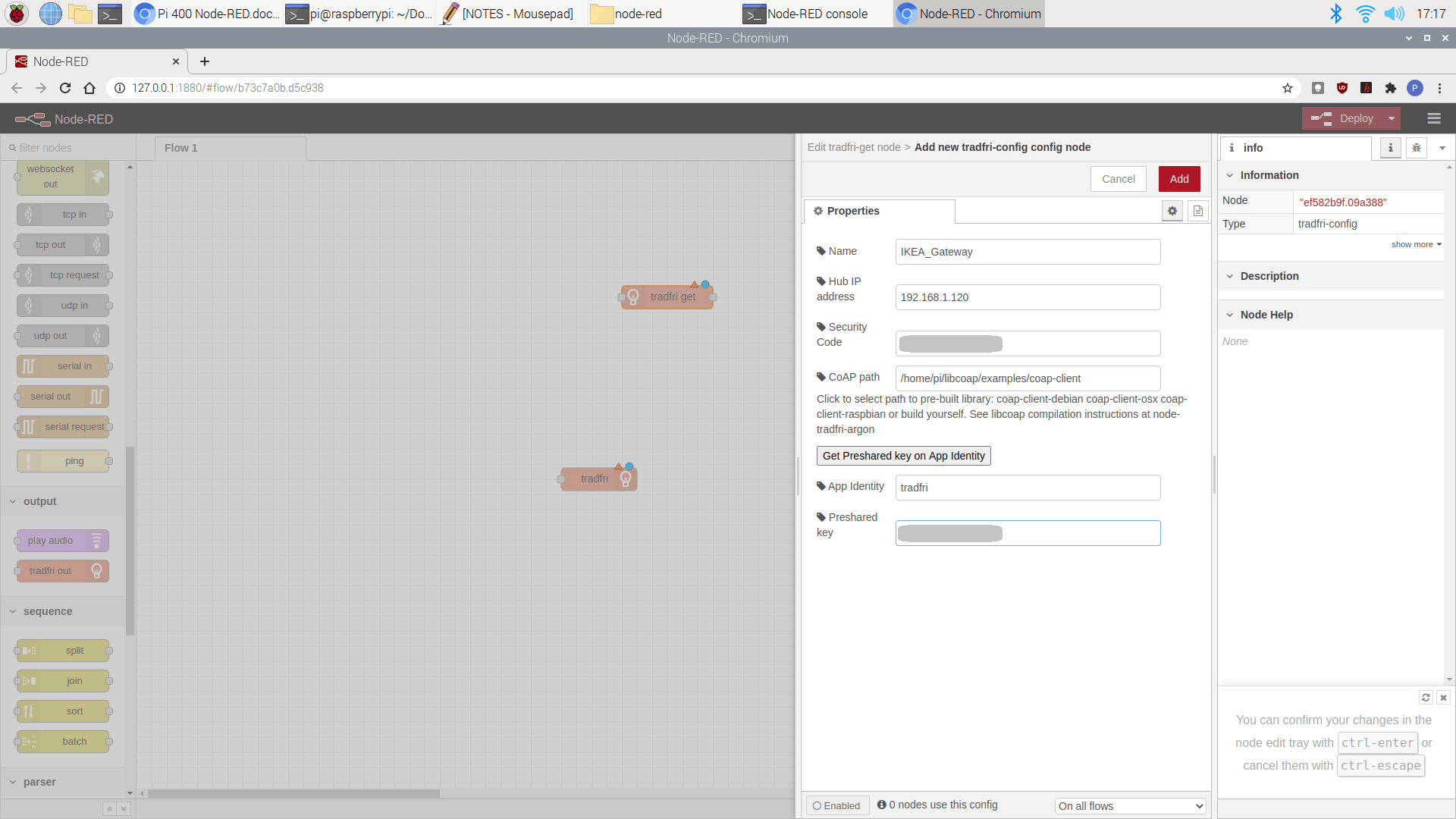 Now a node representing a bulb can be configured using the Tradfri out node.

The node name will change to represent a device on the network. 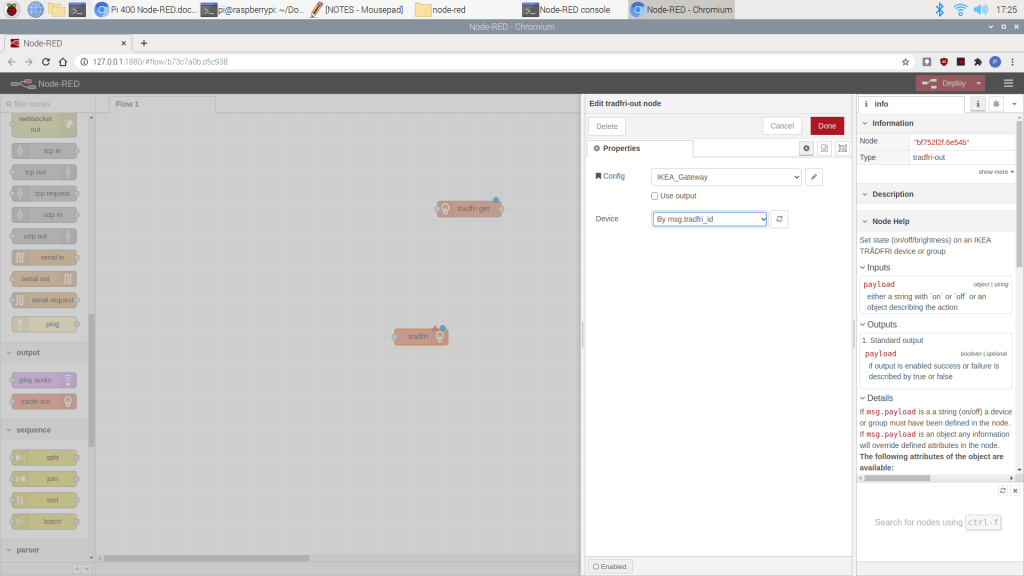 This shows the nodes in the network and their ID’s – it can be used to obtain the status of devices. 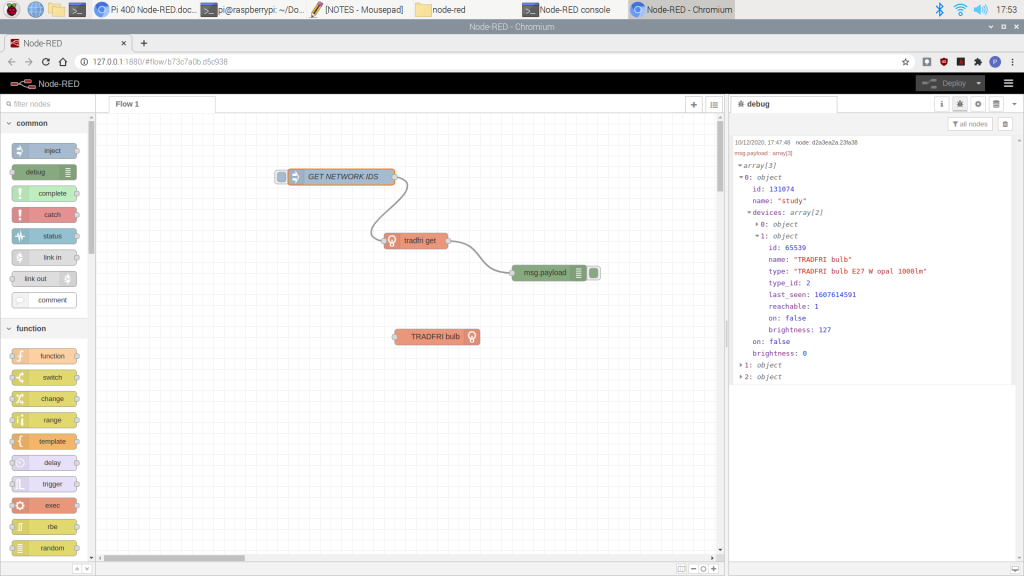 Now let’s use the Tradfri out node and add some Function nodes to switch the light on and off and vary its brightness.

A similar flow can be created by copying these nodes and setting the function node’s state to off so the light can be turned off.

Node-RED is very picky about bracketing correctly in Json – strings must use “str” not ‘str’.

Add a couple of Function nodes to vary the brightness. Set them up like the on/off functions but use the brightness property with an integer value between 0 and 254.

Node-RED is very picky about not using brackets for numbers – numbers must use 127 not ‘127’. 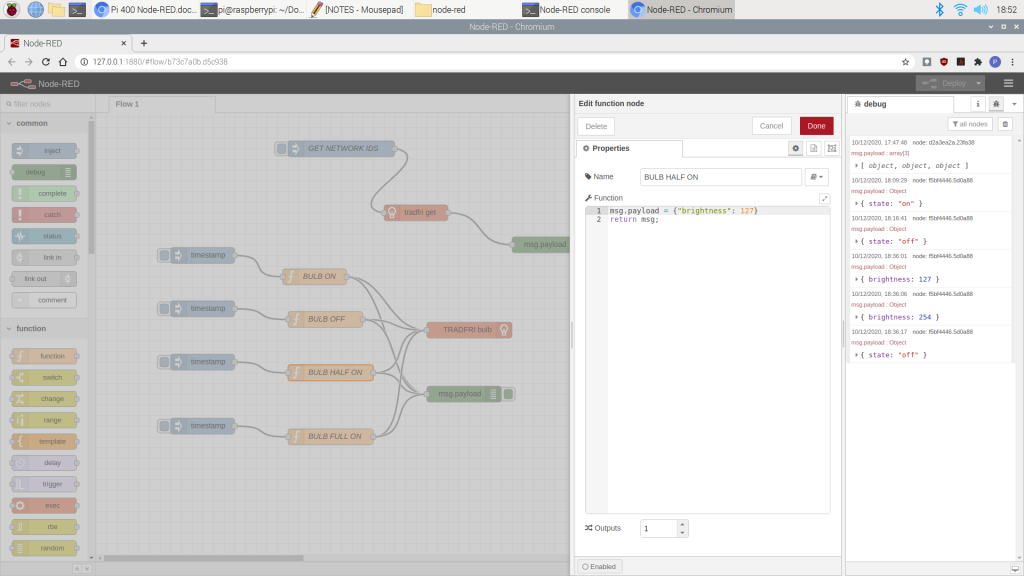 If everything has gone to plan, you should now be able to control your Tradfri lamps and gadgets from within Node-RED using your Pi 400 or Pi 4B. The function nodes that were configured in the project used Injection nodes as triggers for the purpose of testing. The same nodes can be triggered by wiring them up in Node-RED to many kinds of sensors, Arduinos, Raspberry Pi’s and other smart devices to create all sorts of automation effects. Your imagination is the only limit now. Check out all the available flows in Node-RED’s repo: https://flows.nodered.org/