£17.94 including VAT out of stock
See Less Products Show All Products

An easy and fun way to create an Easter egg hunt using two micro:bits. One acts as a radio transmitter placed next to where the egg is hidden. The other is used as a receiver indicating proximity via the LED matrix and an audible ping. As the two micro:bits get closer together, more LEDs light up and the ping increases in pitch and intensity until you find your egg!

We created the code using MakeCode and you can import directly into your editor. You will need at least one V2 micro:bit for the receiver and a V1 or V2 for the transmitter.

This will be the micro:bit that is hidden with your egg. You can use either a V1 or V2 micro:bit.

It transmits a radio signal containing a string ID five times a second.

The radio group can be any number from 0 to 128 but it must be the same for both transmitter and receiver – we used group 1. Transmit power alters the strength and range of the radio signal, making it easier or harder to detect. We used 1 for indoors but this can be increased up to 7 for outside use.

Import the microbit-detector-tx project from the OKdo GitHub into MakeCode: 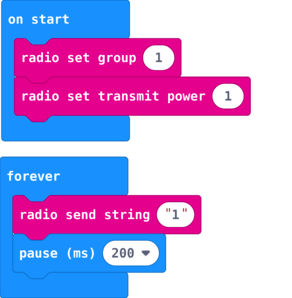 This micro:bit acts as the radio receiver for detecting the egg’s location.

The LED matrix lights up according to how near or how far you are from the transmitter. The number of LEDs that light up are controlled by the signal value in the map block, which gets updated every time a signal pulse is received. The bar graph block creates the display using this value.

The forever loop uses signal strength to alter the pitch and duration of the speaker. Once you get close to the transmitter, the ping sound will increase in intensity.

Import the microbit-detector-rx project into MakeCode from the OKdo GitHub repository: 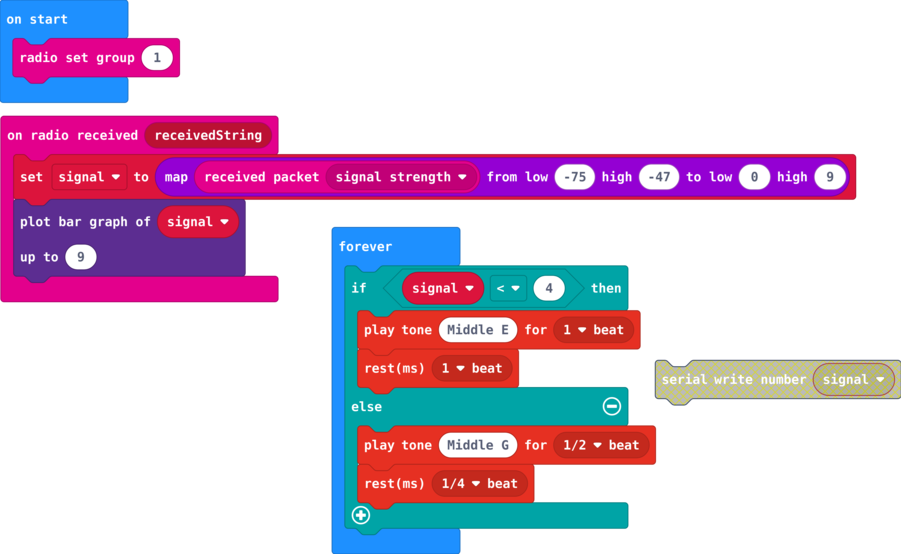 The micro:bit should start receiving the radio signal from the transmitter. The LED matrix will light up and the speaker will start pinging.

Make sure that the radio group block is set to the same channel number for both micro:bits!

Try moving the two micro:bits closer together and further apart to test the sensitivity. This can be altered in several ways:

Once everything is set up, hide your transmitter micro:bit with your egg and use the detector to find it!

Hopefully, you will now have a micro:bit detector pair that you can use to find your hidden Easter eggs.

The project shows how to set up a transmitter and receiver and use radio signal strength as a measure of proximity between the two. The LED matrix was used to give visual feedback along with a changing audible ping.

The code is simple but fine-tuning the values can alter the sensitivity, making it easier or harder to detect the location of the eggs, depending on how difficult you want the game to be.