By Peter Milne, engineer and Linux advocate with more SBCs than an Apollo 11 landing craft.

The ROCK 4C+ single-board computer is coming soon into our ROCK Shop at OKdo. As we’ve recently introduced the low-power, high-performing ROCK single-board computers (SBC) into our range at OKdo, we have spoken to Peter Milne, an independent freelance engineer who’s had a first look at the ROCK 4C+ board and shared his findings about the board’s hardware and software specifications.

It’s no secret that makers and professionals in the industry have been impacted by shortages of semiconductors; hence some manufacturers of single-board computers struggled with supply chain constraints and could not satisfy the rising market demand.

OKdo decided to tackle SBC shortages by bringing a flexible, new-to-market solution – the ROCK platforms, developed in collaboration with Radxa, formed with powerful hardware, as standard.

After we’ve recently met the special edition board, the ROCK 4 SE, we’re steadily approaching the launch of the next model, ROCK 4C+. It brings some incredible features packed in a compact board, ready to help you drive amazing industrial innovations.

Peter Milne had a first glance at the board and shared his findings about what gems are hidden on the board and what to expect from the ROCK 4C+ single-board computer. So, let’s dive into this engineer’s review of the technical features and capabilities of ROCK 4C+.

This is a technical user perspective review focused on the ROCK 4C+ single-board computer developed by OKdo in collaboration with Radxa. The board has many similarities with other popular boards on the market, including the Raspberry Pi 4 Model B, having the same form factor and similar hardware specifications.

In some areas, the ROCK 4 C+ SBC has some additional and superior features notable around storage options, as detailed below.

What are the hardware specifications of ROCK 4C+?

ROCK 4 Model C+ has a broadly similar hardware specification to the Raspberry Pi 4 Model B, making the ROCK 4C+ a great Raspberry Pi alternative. Both boards are of almost the same size and layout. This should make ROCK a physical drop-in replacement for the Raspberry Pi in most use cases. This doesn’t mean that they are direct replacements. The camera connectors are in different locations, and there may be differences in power consumption, software and firmware driver support on the ROCK.

Notable differences are (see table below):

Several features are only available on the ROCK 4C+ single-board computer:

What operating systems are supported on ROCK 4C+?

In conclusion, having reviewed the ROCK 4C+, I can say it is a fast board with many positives, including a Hexa-core processor, light, fast and responsive desktop, external antenna, on/off button, eMMC storage option, great YouTube performance, minimal pre-installed software (I prefer this but it doesn’t suit everyone) and SSH enabled by default. 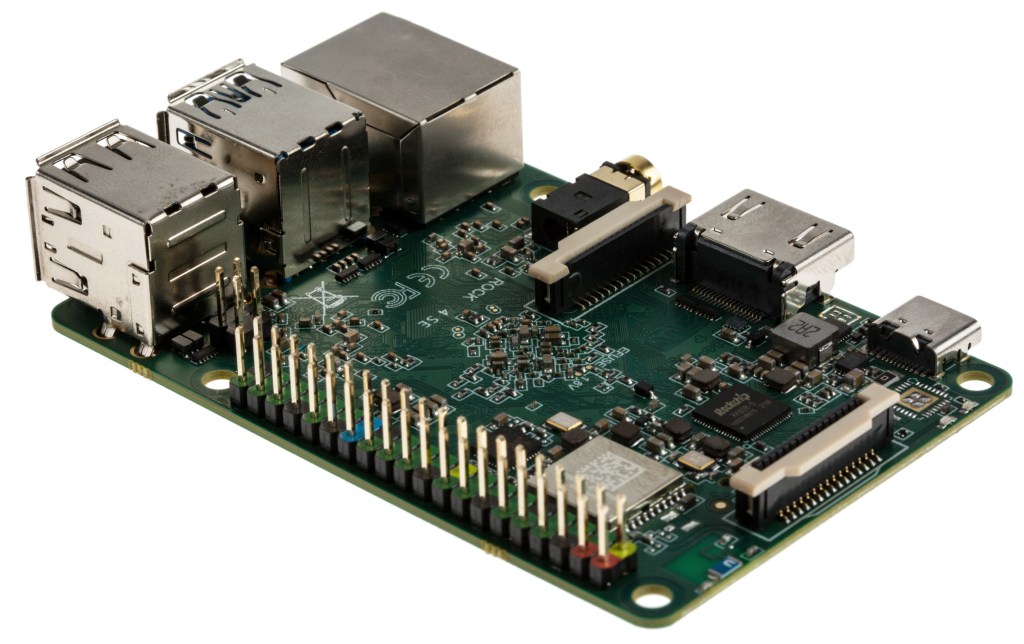 Are you excited to learn more about the ROCK platforms? Discover everything you need to know about ROCK here.

Meet ROCK, a Customisable Range of Single Board Computers Formed With Superior Hardware, as Standard

Discover the hottest and the most disruptive tech trends spotted at Electronica 2022 that are going to change the world.