£21.46 including VAT in stock
Add to basket
Add All To Basket
See Less Products Show All Products

Remembering complicated keyboard commands whilst playing a game is a real pain, especially when there are lots of controls like in FlightGear’s Spitfire simulator. That’s why we built a custom control panel with real switches and buttons to make the in-flight experience much more realistic.

Although this control panel was built specifically for this Spitfire simulator, with a bit of ingenuity, it is possible to make controllers for any game or simulator that uses keyboard input using an Arduino and a simple circuit. Only the Micro, Leonardo and Nano 33 IoT boards are capable of emulating a USB keyboard, so you must use one of these.

The Spitfire aircraft chosen for this project has an authentic start-up procedure that closely follows the original Pilot’s Operational Handbook, a copy of which is included with the download. Now, using the controller to load the Coffman starter cartridge, switch on the magneto’s, priming the carburettors and firing up the V-12 Rolls-Royce Merlin engine is a much more authentic experience. Leaving us to concentrate on flying gracefully through the air!

FlightGear is a sophisticated open-source flight simulator for use in research environments, pilot training and for fun. It is available as a free download on Mac / Windows & Linux systems from https://www.flightgear.org/. Once downloaded follow the installation instructions. 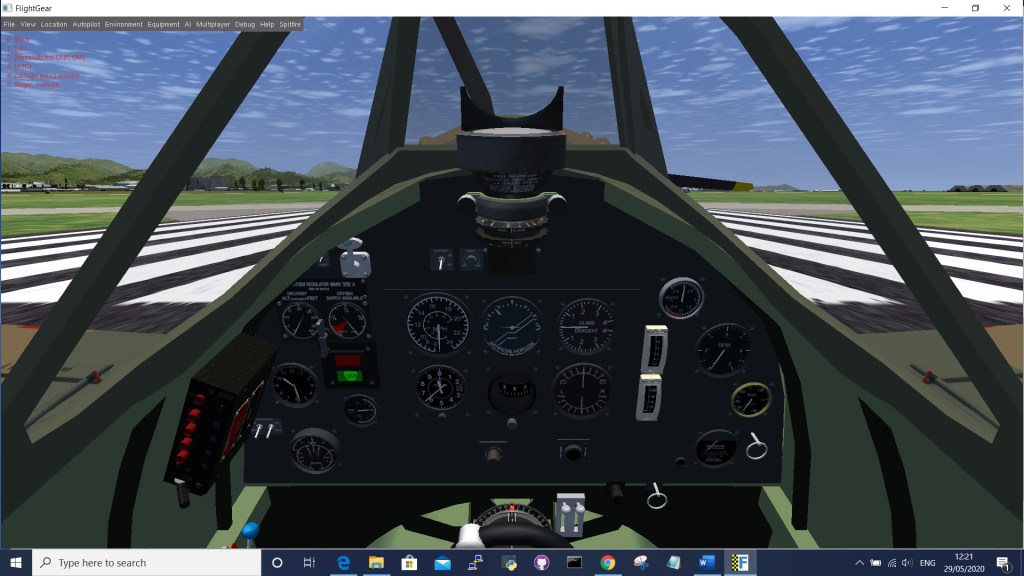 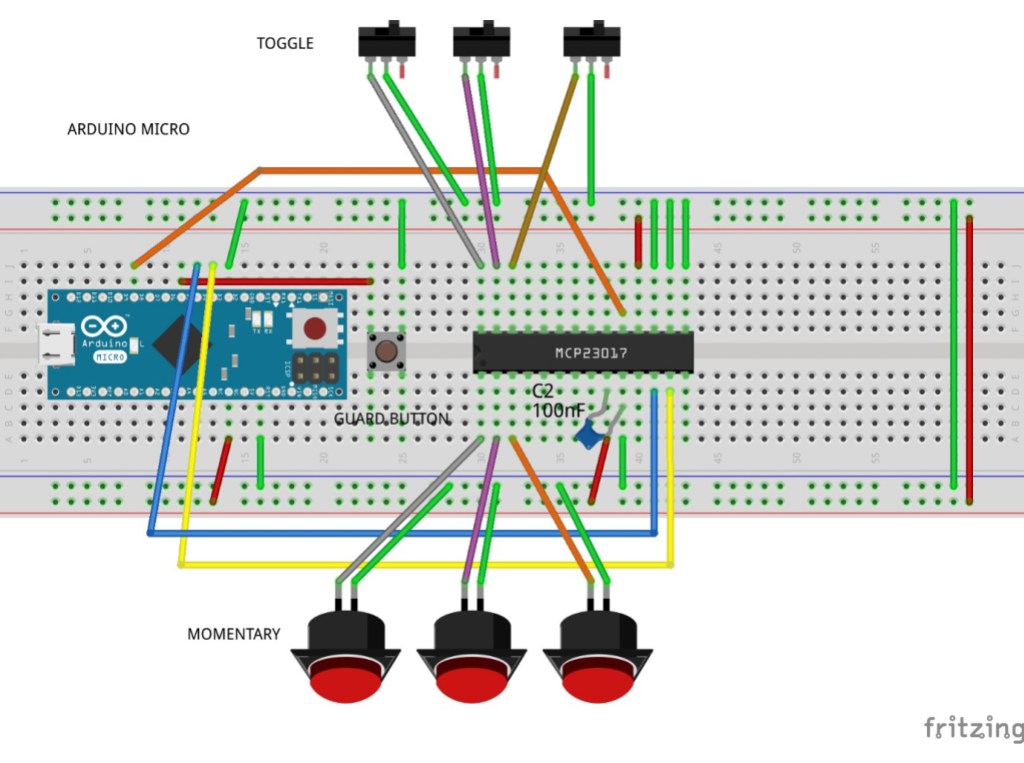 At the heart of the circuit used to detect the buttons and switches is a Microchip MCP23017 I/O port expander IC. It uses the I2C interface on the Arduino and each chip is capable of controlling 16 inputs/outputs. They can also be chained together so you can connect a large number of buttons and switches using just 2 pins on the Arduino. This leaves plenty of room for adding further controls.

The circuit was tested on a breadboard before a permanent version was made using prototyping board with soldered components.

We used 3 different types of switches and buttons to add interest and authenticity to the control panel and to show how they can interact with the simulator.

For controls that are either on/off, or up/down, like the magnetos, flaps and undercarriage gear, SPST or SPDT latching toggle switches work well. They can send the same key code for both on and off states, for when a control toggles, in the case of the magnetos or a separate code for each state used by the flaps.

Some controls like the engine starter button needed to be pressed and held down. This requires a momentary button that can be held in the on state and released for off, just like a keyboard key. These can be made to issue multiple key codes in a stream using the keyboard library.

We also used latching Push Buttons for the Coffman Cartridge loader and Fuel Primer Plunger as they had a nice click action. For these to work the software had to emulate a Momentary Button.

We experimented with different button / Arduino keyboard commands to send the correct key codes to FlightGear. We could not get the ‘{‘ and ‘}’ keycodes used to toggle the magnetos to work, so we reassigned them to keys that do not require shift on the keyboard, like U and u using the FlightGear configuration file. http://wiki.flightgear.org/Howto:Reassign_keyboard_bindings

Each control button or switch is connected to its own MCP23017 port and GND. No current limiting resistors are needed as the internal pull-ups in the chip were configured in the firmware.

One difficulty of using the Arduino to emulate a keyboard is, that if there is a coding error, the device can keep sending keystrokes to the IDE, which hinders re-programming. To avoid this, a guard push button (set as INPUT-PULLUP) on pin D2 was used which waits to be pressed before the keyboard.begin() function is called. If a code error occurs, pressing reset on the Arduino allows it to be re-flashed. The program will not run until the guard button is pressed. Once everything is tested the button can be permanently set to LOW (on) by connecting pin D2 to ground.

You’ll need the Arduino IDE before anything else, you can find out how to do it here.

The Arduino code uses the Keyboard library which comes built-in with the IDE. This generates keyboard codes and sends them over the USB connection. To the simulator, they look just like someone has pressed a key on the keyboard.

There are numerous code examples available to drive the MCP23017. We based ours on the example from Nick Gammon http://www.gammon.com.au/forum/?id=10945

To work well with the simulator, buttons and switches must be highly responsive and it is important not to miss a keypress. This is achieved by using the interrupt capability of the MCP23017 and Arduino.

The keyboard characters sent by each control are defined at the top of the listing. The keyboard handler contains a switch statement which links each control to its keypress. An action is associated with both the on and off states of the control and there is also a test to see if the state has changed. If more controls are added, just add further definitions and case clauses.

The interrupt handler fires whenever a button or switch is operated. Latched switches fire it once only when they change state. Momentary buttons fire the handler twice, once when they are pressed and once when they are released. It is important to time this so both state changes are intercepted which is why there is a slight delay between the press and release functions.

The assumption is made that when the simulator starts, any switches are in the correct starting position so that they will be synchronised with the simulator.

Test the code using serial print statements sent to the Arduino serial console to get all the logic working before adding in the keyboard command functions. The LED attached to pin 13 also flashes when a control is activated. Once everything is debugged, the print statements can be commented out or removed.

Once the breadboard circuit was sending the correct key codes with all the switches hooked up, the simulator was started to check everything was working. We then made a permanent circuit using prototype board and soldered connections. The switches were hooked up to PCB headers using Dupont wires with crimp connectors on one end. The Arduino was mounted on a breadboard so it could be fixed in the enclosure. Everything was now ready to be mounted on a panel. 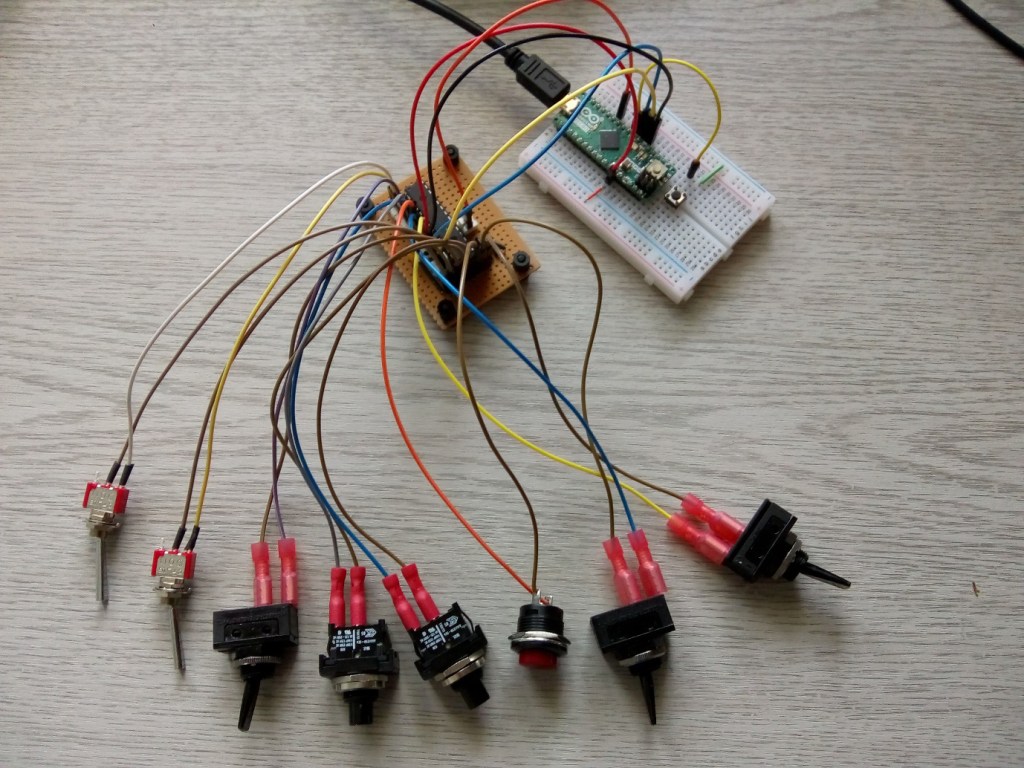 The panel was made from aluminium 1.5mm sheet (150mm x 200mm) using a template drawn in PowerPoint. This was printed on a laser printer and used to position the centre point of each switch. We used a centre punch to mark the hole position before drilling pilot holes and then enlarging them using a taper drill bit.

A box was made from fibreboard glued together with super-glue. The panel was mounted on the front of the box using 4 self-tapping screws. 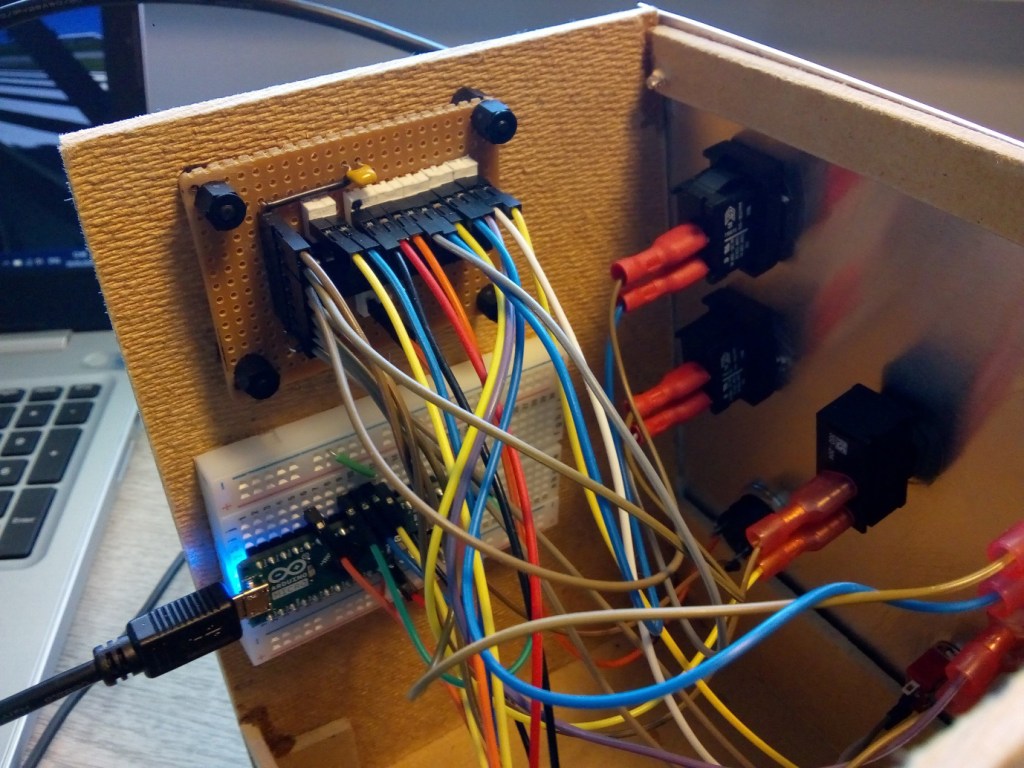 Before fitting the switches, the laser printed labels were attached to the panel using double-sided tape. The switches are organised in a similar fashion to the actual Spitfire cockpit layout and we tried to give it a vintage look. 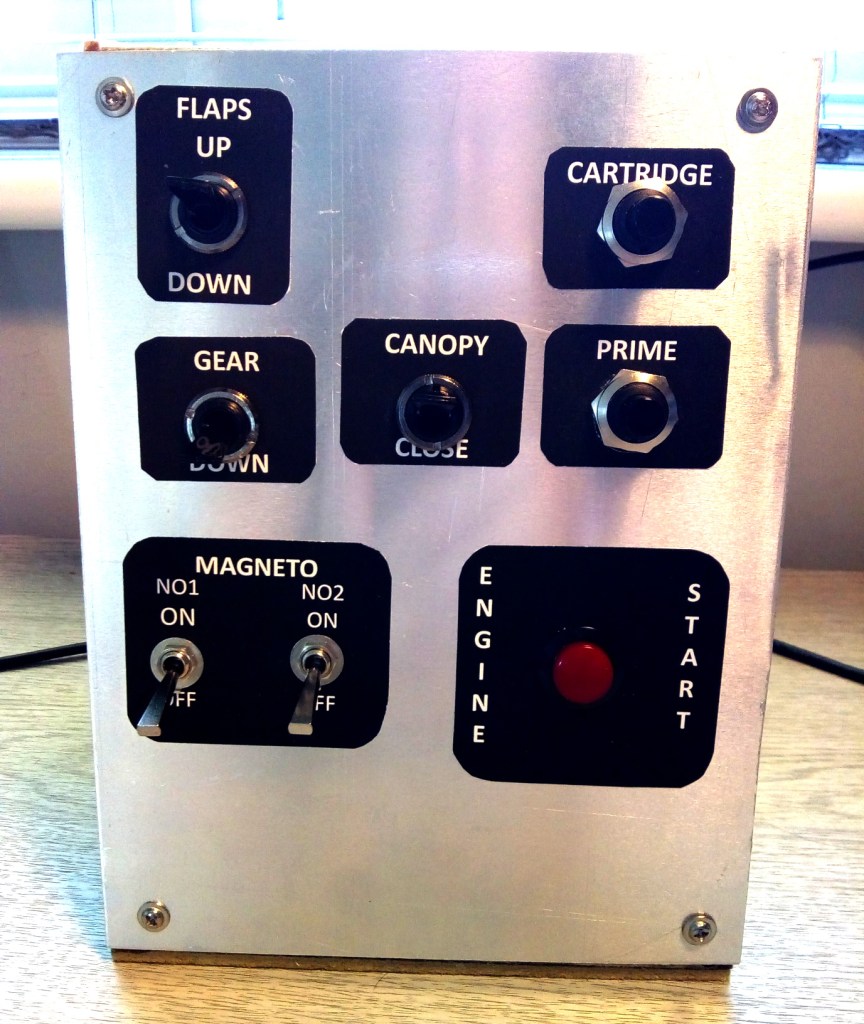 With a little ingenuity and an Arduino and fairly simple electronic circuit, it is possible to make a game controller that really enhances the gameplay or simulation.

For our FlightGear Spitfire controller, we focussed on building a panel that would enable us to enjoy the authentic experience of starting up this historic aircraft and preparing for take-off.

Used in conjunction with a Joystick, which controls the aircraft flying surfaces and brakes, we were able to enjoy the thrill of flying this classic Spitfire aircraft and intend to add rudder foot controls next!

The techniques used in the project can be applied to any game or simulator that uses keyboard input to issue commands, so we hope you will have fun building one for your favourite game. 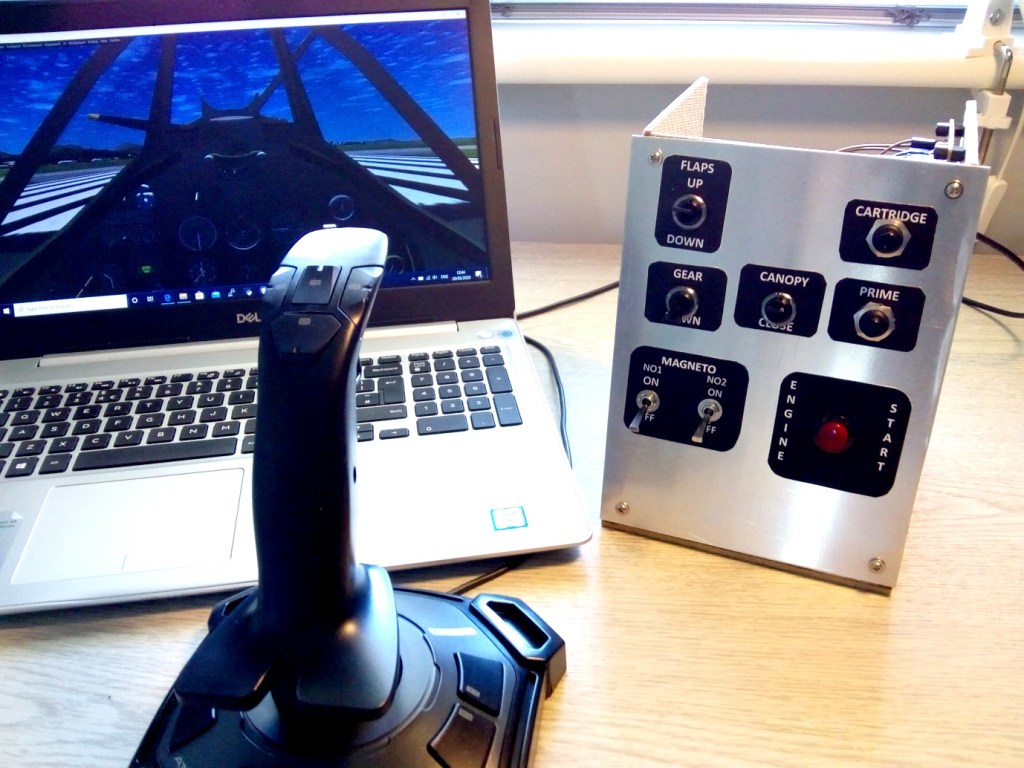 Make a cryptography machine with a Pi 400

Use a Nintendo gamepad with your computer