Are you ashamed of your Access Point? (Come on, admit it – after all, you’re amongst friends now.) OK, let us get the ball rolling by saying loud and clear: WE WERE ASHAMED OF OURS. But that was before we created a pro looking Access Point with a Raspberry Pi.

We’ve never looked back. Our self-esteem has improved. We have more confidence in social settings. In fact we’re now the coolest guys in the Pi gang. So if you’d like to know how to achieve this transformation, stay tuned…

Right. We’re going to show you how to build an awesome Access Point with your Pi. It’s actually super easy since the Pi 3 comes with Wi-F on board. So there’s no excuse for sticking with that so-so AP.

To begin with, a few housekeeping points. We’ll be using the new Raspberry Pi 3 and the Pi Supply boards PaPiRus and Pi PoE for this demo, but you can still achieve the end result without these. Our setup also assumes you’re working on an updated version of Rasbian Jessie full and you know your way around nano and a few configuration files.

Oh, and you’ll also need to try your hand at a teeny bit of soldering. 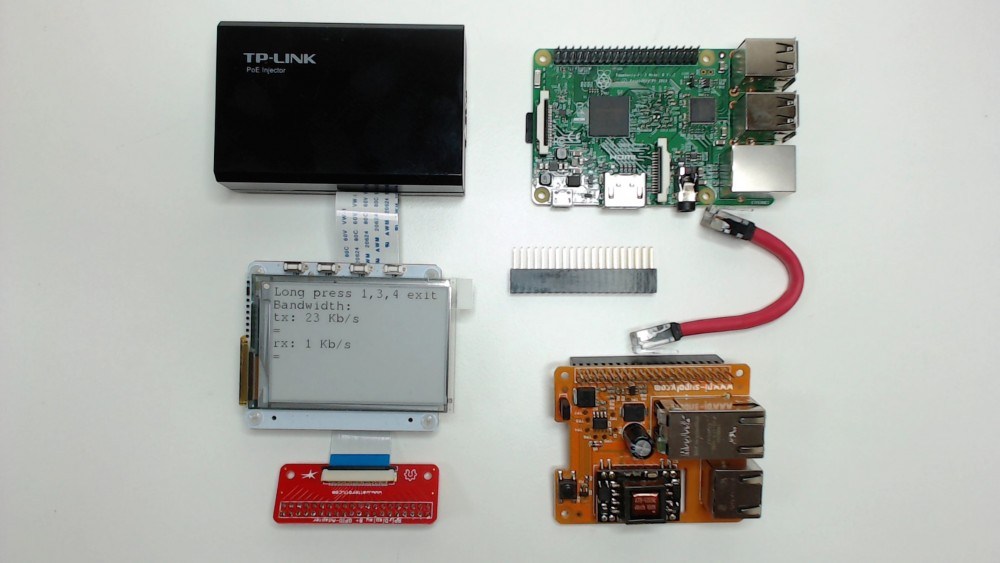 The additional header lets us install the PaPiRus on top of the Pi PoE or – as we did – via the GPIO adapter.

Your infrastructure may well already be able to deliver Power over Ethernet, but if it doesn’t you’ll need to use a PoE injector like the TP-Link TL-POE150S.

We connected everything up as shown, making sure the flat cable for the PaPiRus is connected the right way around. 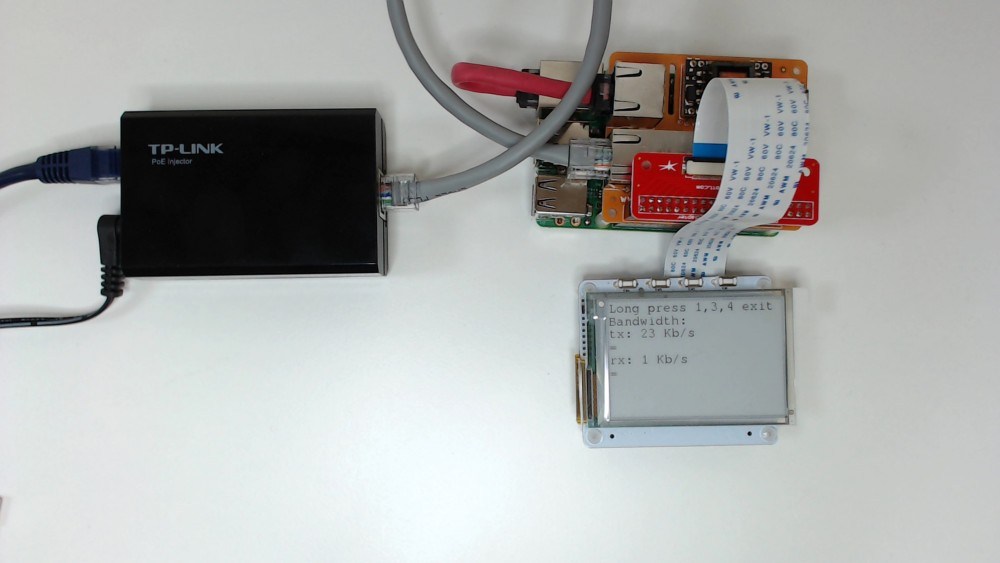 Then, with everything connected and ready to be fired, we gave a long press on the Pi PoE module switch to power up the system. 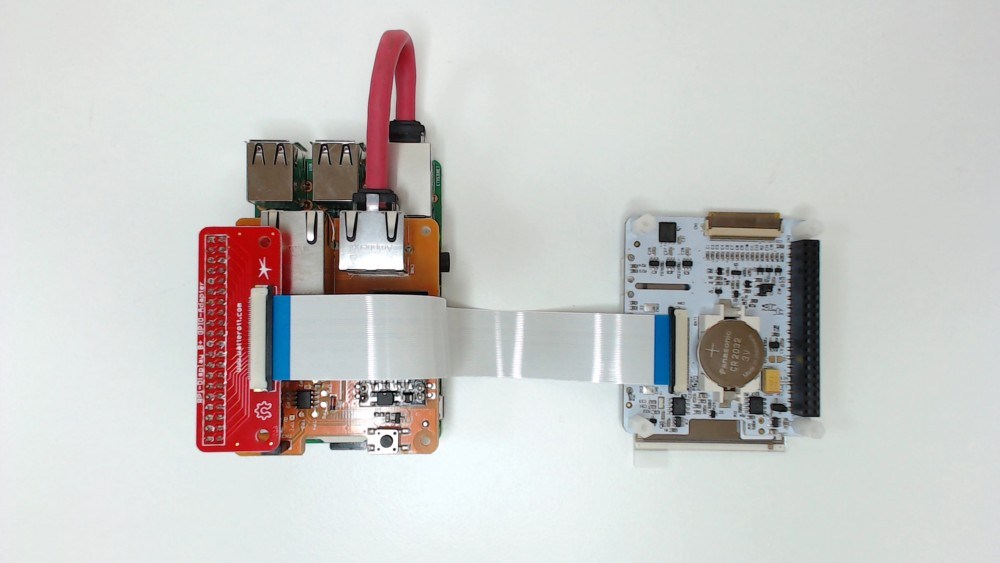 We started by connecting up a monitor, keyboard, mouse, Ethernet cable and starting Raspbian.

We expanded the filesystem via

Then chose Expand filesystem and waited before restarting.

Since we were in raspi-config we took the opportunity to enable SPI (which we’d need for the PaPiRus later on).

Now we chose ‘Advanced Options’, SPI and accepted to load the modules at boot.

Making sure you have the newest system software is always a good idea when starting a new project so let’s get it updated now.

So far so good. At this point we were ready to install and configure hostapd – we used this to create the AP part of our system.

Next we needed to create the configuration file. As this file doesn’t exist we had to create a brand new one.

Don’t worry, you don’t have to create it from scratch, you can download the supporting code for GitHub – which also contains the templates for the configuration files.

We edited the hostapd.conf template file

and replaced the values below with our own:

Now we copied the file hostapd.conf to the right directory.

At this point we needed to edit the following file to make hostapd using the above configuration at startup.

We changed it by adding:

Before finally starting the service:

Now we needed to install bridge-utils that let us merge the Ethernet and the Wireless interfaces.

And this is where we could configure our networking using the template provided:

before changing it to:

to backup our existing file

and copy the new one

Now it was time to reboot our Pi – and, as if by magic, we found a new AP with the SSID we chose!

Any devices now connecting to it should get their IP from the DHCP on our home/office router – and be able to browse the internet. How cool is that?

Still heady from our success, we now began the task of preparing PaPiRus.

If you’re using the Pi PoE there are absolutely zilch software steps involved. Huraah. But since we were using PaPiRus we needed to install drivers and packages. These will also give us some ready-made examples we could use to test everything’s working before turning to the code that lets us manage the AP.

So we took a deep breath and installed the PaPiRus software by running the following command from our home folder:

(Top tip: if you get lost during this part, you can simply get back to your home directory by executing cd~ .)

Our installation was pretty quick and resolved various dependencies for the packages needed to use the PaPiRus screen.

This should be it. Run:

If all is well you should see a nice clock on your PaPiRus. And there it was in all its ticking glory! With mounting excitement, we knew we were now just one step away from getting our AP ready for business…

Our PaPiRus screen now sprang to life and displayed our SSID and AP IP address. By pressing switch 2 we got to see some bandwidth stuff – and by pressing switch 3 we saw a detailed view of the AP networking setup. Easy.

We now had a very swish and portable Access Point to flash around and impress the guys at Raspberry Pi Jams or hackatons or wherever our Pi adventure takes us next.

We picked up some useful tips along the way with this project, so in a spirit of generosity we thought we’d share them with you. How nice are we?

For starters, there are a couple of methods you can use to create an AP at the OS level. In our view it depends on what you consider an AP to actually be. Without dwelling on this at length we decided to implement the AP as an ISO layer 2 device – which is a fancy way of saying there won’t be any routing, firewall or NAT involved here. The device will ‘merge’ the Ethernet network card and the Wi-Fi into a bridge and it will only have one IP address. In fact it’ll behave like a typical AP and not as a home Broadband Router.

And then there’s this little quandary: what if your router needs to have a DHCP enabled? Since the AP will not serve as a DHCP, it’s pretty essential you have one enabled on your router. The first part of the setup also needs the Pi to receive an IP from the router in order to get all the packages required off the internet.

That’s all we’ve got. So go create your awesome AP and show the world what a pro you truly are.