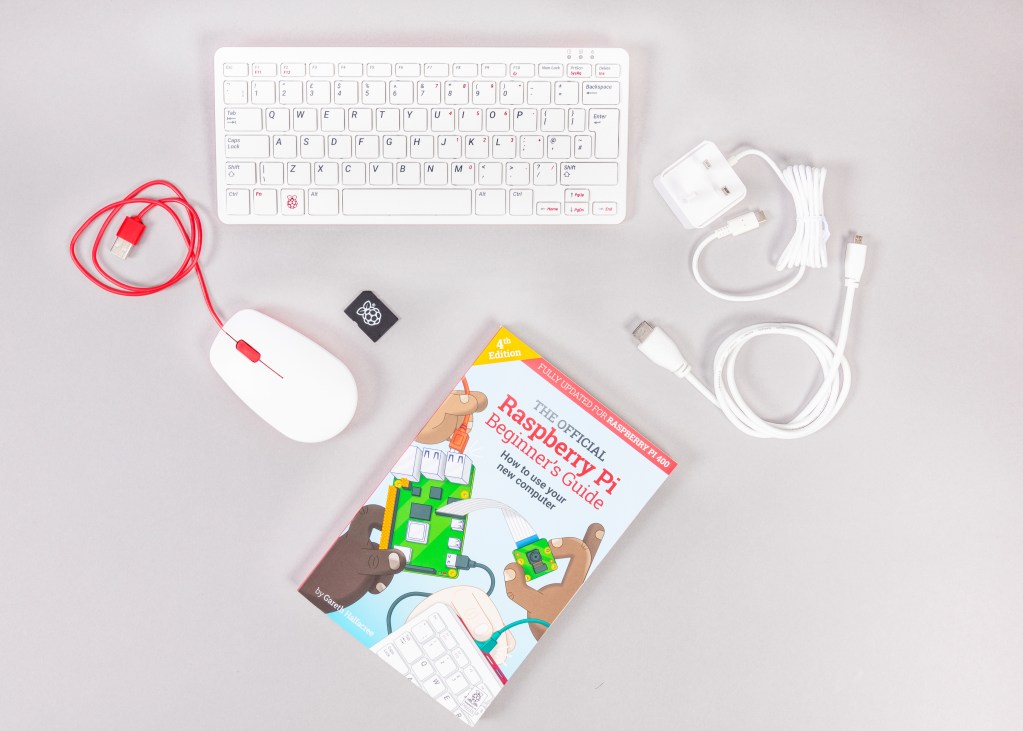 Our guide to the Raspberry Pi 400 covers everything you need to know, from how it works, what makes it unique, how to get started and what to make.

Since it first landed in 2012, the Raspberry Pi has won many adoring fans. It has opened up the world of coding to a new (and younger) audience. Even experienced coders can’t get enough of the Pi. But the organisation behind this incredible device isn’t resting on its laurels. Launched in 2020, the Raspberry Pi 400 is making the idea of the personal computer smaller – and cheaper.

In our complete Raspberry Pi 400 beginner’s guide, we’ll cover everything you could ever want to know. For all your ideas and inspiration, we’ve got your back. Explore what you can do with a Raspberry Pi 400 or find out more about what you need to get started. It’s all in here. So, let’s take a closer look at why you need the Pi 400 in your life…

Up until late 2020, a Raspberry Pi came as a mini computer board that you could build out from with various devices and peripherals. You could even get dedicated Pi kits that combined all you needed to get your project off the ground. But connecting accessories to the credit-card sized Pi took up space. It needed a mouse and a keyboard, plus there was some set-up required.

With the Pi 400, however, the company has now created “a complete personal computer – built into a compact keyboard”. It is essentially an official Pi 4 board built into a Pi keyboard. But it is also a step-change for its maker. Like vintage home computers such as the BBC Micro or the ZX Spectrum, everything you need to get started is built into a single, affordable form factor.

And maybe the one thing that makes it so awesome is that all you need to do is add a screen – whether that’s a monitor or your TV. With the Raspberry Pi 400 personal computer kit, you’ll be equipped with all the rest. This includes the power supply, a HDMI cable, a pre-loaded microSD card with the Pi OS, a mouse, and a Raspberry Pi 400 beginner’s guide for good measure.

What makes it different from other versions of Raspberry Pi?

It’s all in the form factor. Simon Martin, Raspberry Pi’s Senior Principal Engineer, revealed that fitting a Pi inside a keyboard had been in the pipeline for at least four years. Unlike the ‘classic’ credit-sized boards such as the Raspberry Pi 4, the Pi 400 is a plug-and-play keyboard with various ports and connections. That makes it a lot faster and easier to get up and running.

The Raspberry Pi 400 is available as just the keyboard computer or as a kit together with a 15-watt USB-C power supply, a USB mouse, a preloaded 16 GB microSD card, a micro-HDMI-to-HDMI cable, and the official Raspberry Pi Beginner’s Guide. Let’s unbox the kit together in our video below 👀:

What can you do with a Raspberry Pi 400?

Two features that make the Pi the best-selling British computer ever made are its versatility and its affordability. It doesn’t matter if you’re new to coding or know your way around a PCB. You can take the Pi 400 and do so much with it. The fact it’s available in this form factor – and at a very affordable price point – means that more people can now take advantage of this.

Working or studying at home

For Raspberry Pi, education is a big deal. It’s right at the centre of what the company set out to do when it first launched the Pi in 2012, so it’s no surprise to see that learning and studying is integral to what the Pi 400 is capable of.

Out of the box, the Pi 400 is a brilliant introduction to coding for children and novices. You don’t need much (if any) know-how to get started. Pi 400s could be used in schools, offices, factories, and even at home to teach important and valuable skills to people young and old.

It’s also proving more than useful for those of us working or studying at home. A Pi 400 has the power within its keyboard housing to be used for many different work purposes. It’s putting computers into the hands of children who don’t have one for learning from home too.

The question you’re asking yourself shouldn’t really be “what can I do with a Raspberry Pi 400?” Instead, it should be “what do I want to do with my Pi 400?” That’s because the potential is there to build a blockbuster of a project. So, how about a 4K home entertainment system?

The Pi 400 can output video in 4K resolution. With the right kit and accessories, this means you can build a fully-fledged high-resolution media centre. From live TV to your favourite streaming service, the Pi 400 offers a crystal-clear home cinema experience.

Make your own smart devices

Today, it seems like there’s no home appliance or device that can’t connect to the internet. But some of these can be quite pricey. So, why not use your inexpensive Pi 400 to create your own smart home? Light bulbs, security cameras, thermostats, and even plant-watering systems are just some of the possibilities that you’ll find tutorials for.

You can’t beat a bit of downtime and the Pi 400 can certainly add a dash of fun. With the many tutorials out there, why not use one to create a retro gaming arcade machine? Hook up a latest- generation console controller and dig out your old favourites. In addition to a monitor, all you’re really going to need is some emulator software to bring those old games to life. It’s that easy.

The Pi 400 includes a horizontal 40-pin general purpose input and output (GPIO) header. With this, it’s possible to use your Pi to delve into the wider world of electronics. You could control motors, devices, LEDs and many other things. With this capability, you have the ability to create your own traffic lights or build a temperature sensor. The Pi 400 lets you be as ambitious as you want.

Don’t think these ideas are all you can do with a Raspberry Pi 400 – The Pi 400 is so popular because it opens up a whole range of possibilities. It’s now even easier because you’re working with a fully integrated, user-friendly PC.
Oh, and you can take the Pi 400 anywhere with you too.

Looking for how to get started with the Raspberry Pi 400?

You can start using your Raspberry Pi 400 in no time at all. In fact, there are only three main steps between unboxing it and enjoying it. Check out the our step-by-step guide to getting started with a Pi 400 and see just how easy it is.

We love the RPi 400, it really is a true game-changer, and you can be a part of it. We have the full Pi 400 all-in-one kit in stock and ready to go. Order it from us and you could be up and running as soon as the next business day! Then it’s just a case of plugging in and playing…

Computer Science in the Classroom Report