Awaken the Force with micro:bit

May the 4th be with you

£5.04 including VAT in stock
Add to basket

£3.06 including VAT in stock
Add to basket

£3.06 including VAT in stock
Add to basket
Add All To Basket
See Less Products Show All Products

For millennia people have used the force for good and evil and just to lift things up and move them about. Then when Sir Isaac Newton invented gravity in 1687 everything got much harder and it fell into disuse. Nowadays only a handful of knights still remember how to use it properly.

The good news is we have found quite a large amount of force inside the micro:bit, enough in fact to lift small, everyday objects. If you want to find out how to lift things much like the masters, this project will show you how.

The project uses a small but powerful stepper motor to apply the force to small objects so that they can be lifted very rapidly into the air and held there. When the force is released, they drop back down to earth. 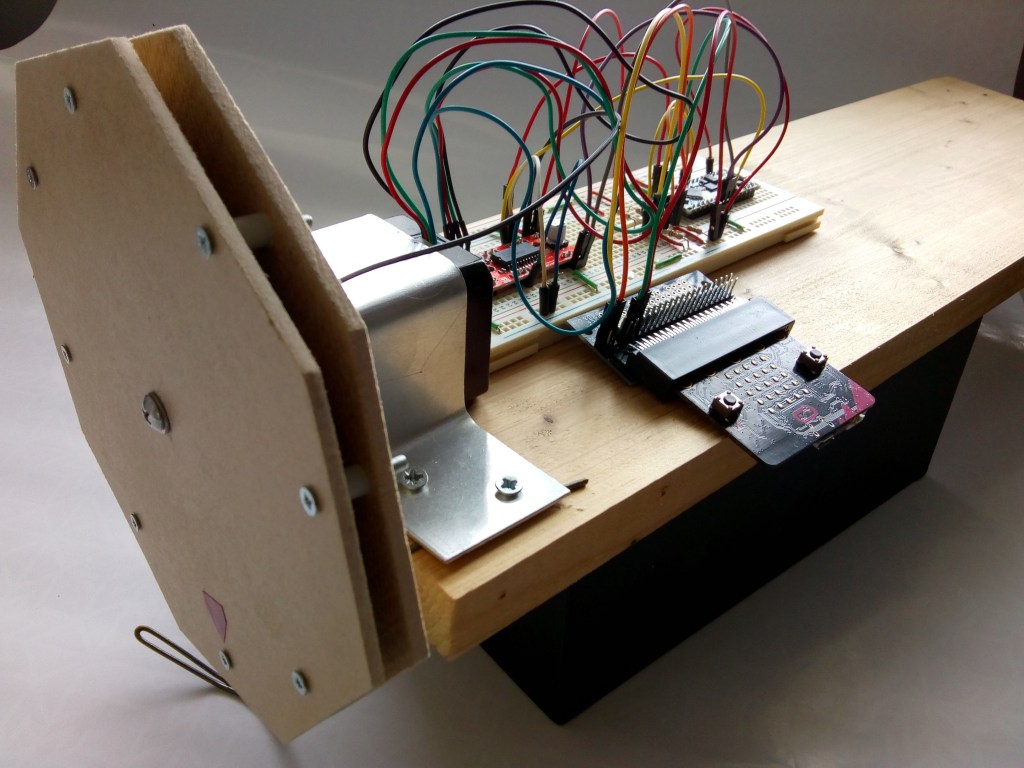 We built a 65mm radius spool out of two 3mm fibreboard plates held together with M3 nuts and bolts, spaced out with 7mm lengths of plastic tube. The spool was attached to the 5mm motor shaft with a brass hub.

This size spool will lift about 400mm per revolution or 200 steps. 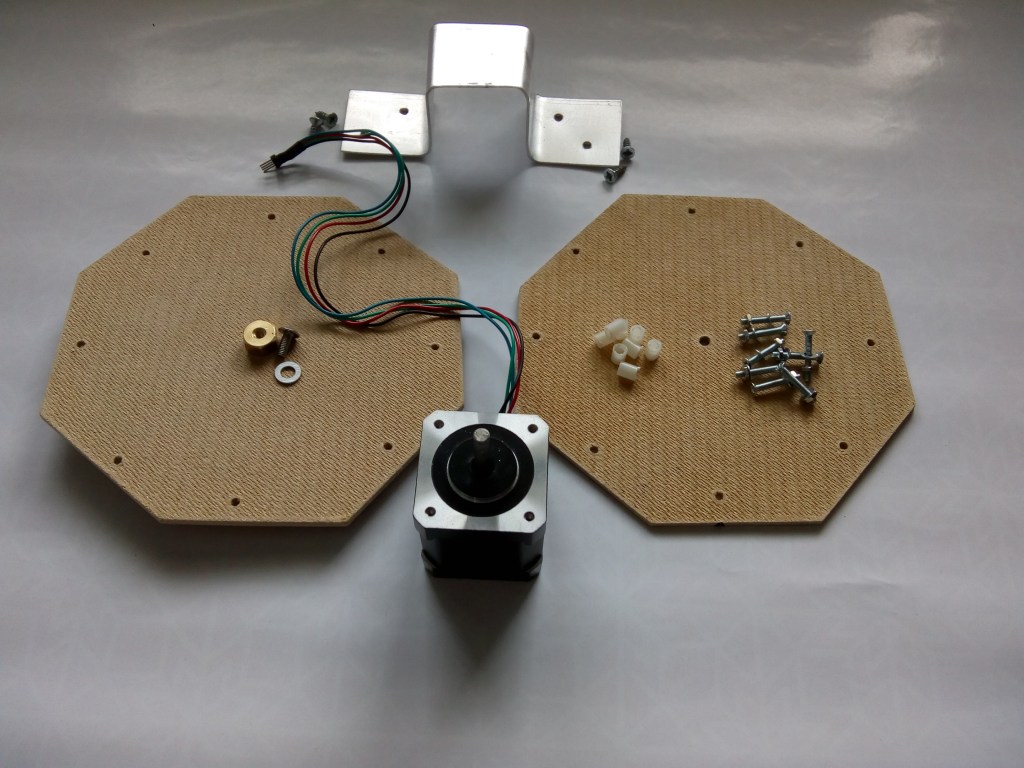 The motor assembly was fixed to a wooden board using a bracket bent from aluminium strip which also held in place a guide made from a cut-down wire coat hanger.

Two lengths of almost invisible fine nylon line are used to attach to the object you want to apply the force to.

Although it’s possible to control stepper motors using a micro:bit and EasyDriver board directly, we wanted to accelerate the motor very rapidly (in a force-like way) so we used an Arduino Nano Every running the SpeedyStepper driver code to control the EasyDriver.

Because both the Arduino and EasyDriver use 5V signals, they can be connected directly. We used a bench power supply set to 9V / 1A as input to the EasyDriver and Arduino VIN: 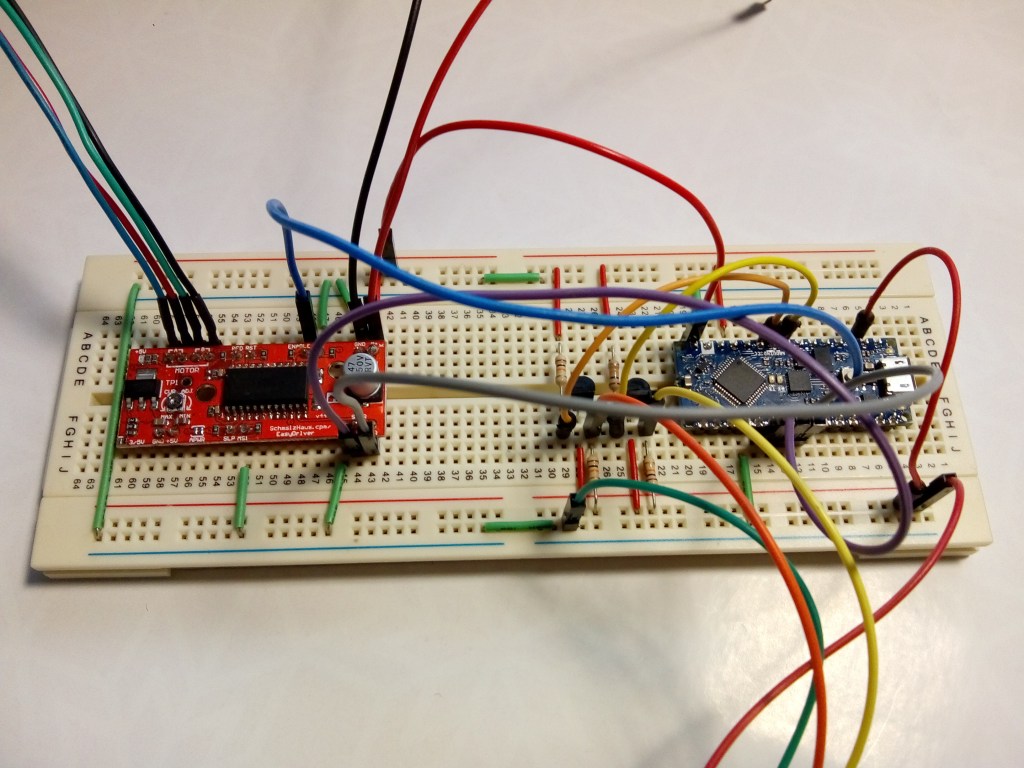 The micro:bit is attached using an edge breakout connector and powered by the Arduino 3.3V output – we had to solder male headers for the SDA (Pin 20) & SCL (Pin 19) as they are not installed on the standard breakout board.

3 different voltage levels are used in this circuit, which will damage the boards if connected wrongly – please check your circuit carefully before applying power. The single breadboard shown in the photographs has separated power and ground rails – not all breadboards are like this! 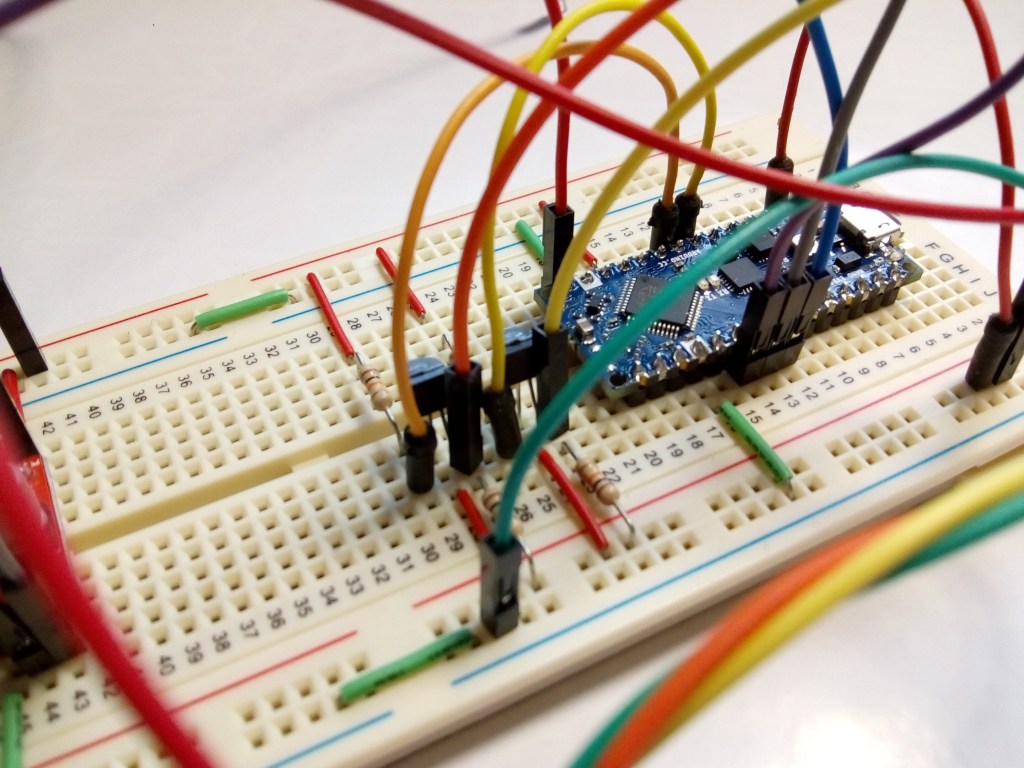 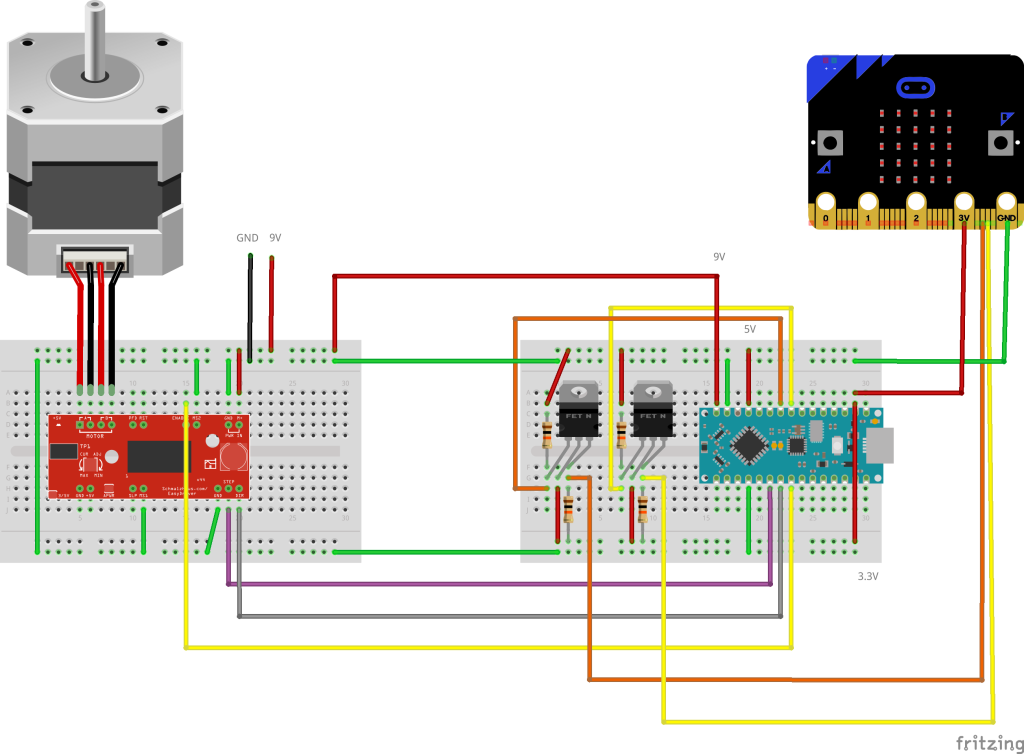 Stepper motors are controlled by signal pulses, each pulse moves the motor one step. While It’s possible to generate these pulses using the micro:bit, to accelerate the motor to a high speed from standstill requires a dedicated driver program. We chose an Arduino Nano Every because there are great libraries available which can control the speed and acceleration of motors to give the effect we wanted.

Several settings might need adjusting, according to the properties of your motor, spool and the speed and height that you want to lift objects.

Our stepper did 200 steps per revolution in full-step mode to make it move as fast as possible. By calculating the circumference of the spool this works out at about 0.5mm per step. We found it would not accelerate at much more than 800 mm per second but you can try changing this to see if it works for your setup.

Triggering for the force comes from a battery-powered micro:bit which is attached to your arm. It’s best to put it under a sleeve so no one knows it’s there.

The accelerometer on the micro:bit can detect gestures like up, down and tilt. We used the tilt gesture to trigger a useTheForce function which sends a command string over the radio to the receiver micro:bit attached to the Arduino.

The code can be added as an extension in MakeCode.

The micro:bit receiver listens for commands coming from the Commander micro:bit and when it receives a message it checks to see if it’s a lift or drop command. It then calls another useTheForce function which generates a signal to send to the Arduino over the I2C bus. It sends a byte of value 1 to lift the object and a zero to drop it.

The code can be added as an extension in MakeCode.

Make sure you set both your micro:bits to the same radio group. 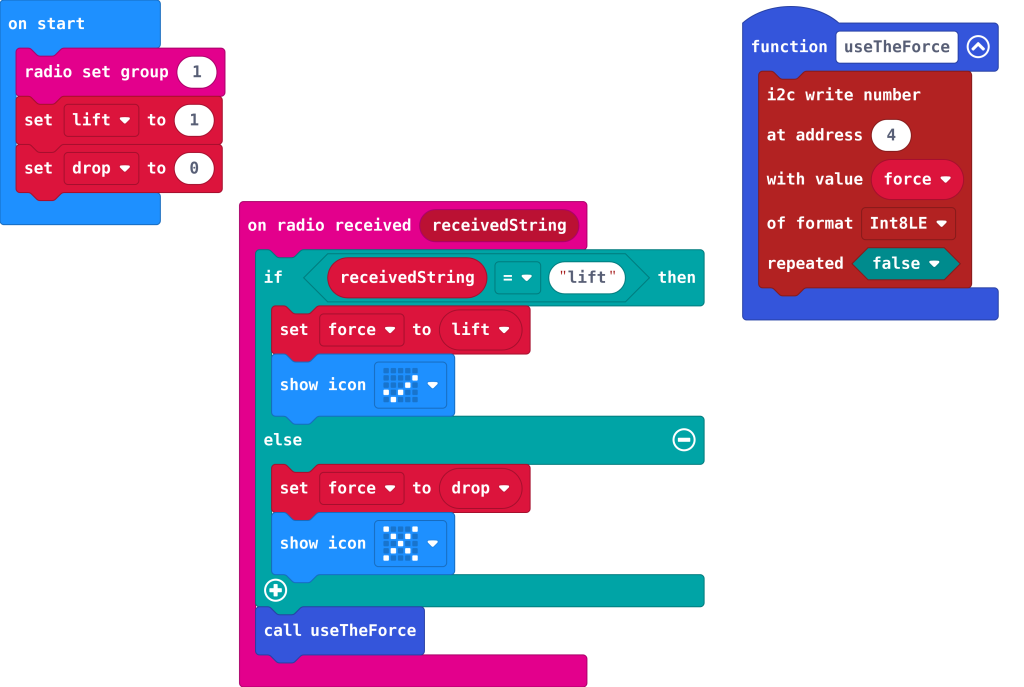 With a bit of practice and lots of concentration, it’s possible to lift all sorts of small objects with just a flick of your arm, just like a Jedi. You can hold them up in the air for as long as you like, then with another flick remove The Force and they will fall back to earth. Be careful not to try this with anything breakable or it will end badly!

There’s a lot going on in building this project and although it’s a bit of fun for Star Wars Day many parts of it can be applied to other robotics projects.

Learning to control stepper motors allows very accurate repeatable movements which is why they are used in CNC machines, 3D printers and many robots. Stepper motors also have a high holding torque so they can hold their position when stationary.

micro:bit is really easy to program and has nice features like gesture sensing which is fun to experiment with. It’s also simple to set up radio communication and send information from one micro:bit to another so they can be used as components in more complex projects.

Wear your heart on your sleeve with the micro:bit