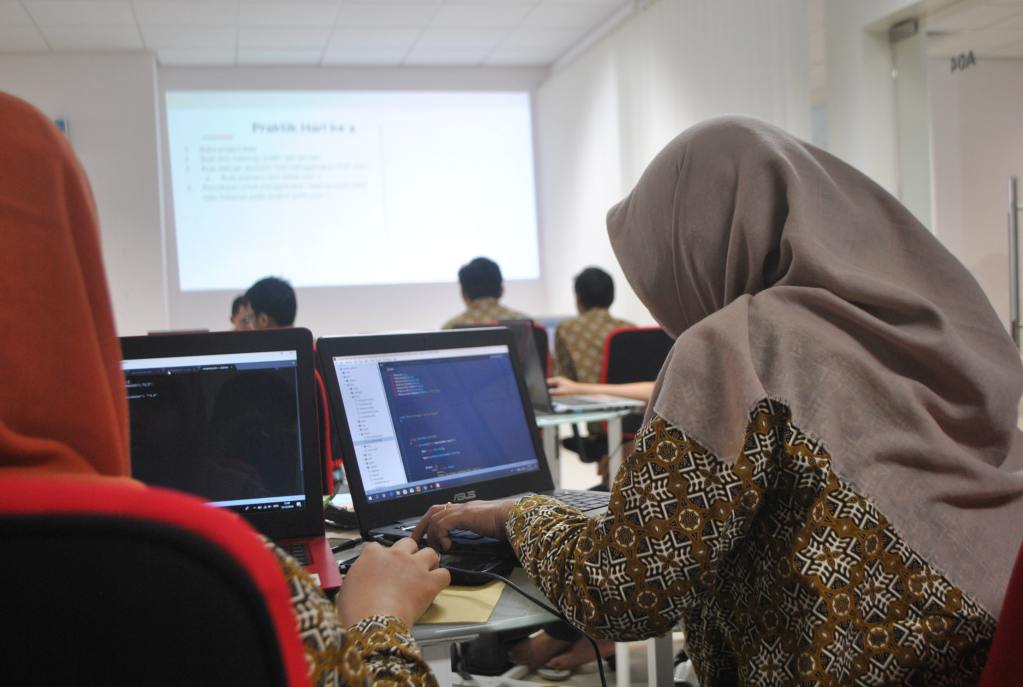 Demand for computer science talent is soaring in the UK tech sector but our research shows that we still need more young people to consider this as their career to ensure the industry can continue to grow.

Computing really does underpin modern life, and the continuing success of the technology industry depends on the supply of talented people who have the crucial computing and problem-solving skills to enable progress, innovation and growth in this fast-changing field. But gaining access to that talent pool isn’t always easy, and as the industry grows so too does the number of qualified people needed to take on new roles.

We have recently done extensive research into the provision of computer science education in the UK, to determine if enough young people are engaging with this subject and being encouraged to consider it as their career while they’re at school.

This Computer Science in the Classroom report highlights that while the number of students sitting computer science courses at school and university has been growing, there is still a skills deficit and currently there are more jobs being advertised than there are qualified people to fill them.

Read on to find out more.

Our original Computer Science in the Classroom report research was carried out in Spring 2021. However, we decided to refresh the data again in August 2021, following the release of the latest UCAS and GCSE results, to see if and how things had changed in the last year.

We found out that the number of students undertaking Computer Science courses at GCSE and undergraduate level had risen again, according to the new 2021 data. This indicates that the industry’s united drive to engage young people in computing careers is paying off, which is so encouraging to see.

An additional 1,500 students sat the examinations at GCSE level this summer than in 2020, according to Joint Council for Qualifications figures.

The growth in student numbers is only marginally higher as a percentage though (2%), showing that we mustn’t lose momentum now, and there is still more work to do in increasing the popularity of this subject area.

That said, the progress made so far is very positive. We discovered that since 2014, when the first examinations took place for this course, the total number of students sitting the Computing GCSE has risen by an enormous 377% – from 16,773 to 79,964 in 2021.

Some areas had seen a decline in interest. Student numbers for this course were quite down in Lincolnshire (-25% in 2021 versus 2018), Derbyshire (-19%), South Yorkshire (-18%), Cumbria (-17%) in particular. This data suggests that these areas may be suitable for a targeted student engagement drive in the coming months and years.

At undergraduate level, a similar rise in interest was reported by UCAS, with applications for Computer Science courses also up (2%), from 141,400 in 2020 to 143,710 in 2021. This figure doesn’t show accepted application numbers, so it isn’t completely reflective of how many computer science graduates we can expect in roughly three years’ time, but it is another encouraging sign that interest in this subject is still on the rise, albeit only marginally.

Women represented just 18% of the applicants this year, however the increase in students is higher amongst females in 2021 (up 5% versus 2020) than it is amongst males (up less than 1%).

Computing courses were found to be most popular amongst young students, with UCAS applications from those aged 30 and over down 3% year on year, despite the Coronavirus pandemic causing nationwide job losses that have led to many retraining in new careers.

Overall, the 2021 data is reassuring but continues to demonstrate the ongoing need to engage more young adults in this subject area, to ensure the growing tech sector has access to sufficient talent in the coming years.

Computer Science on the Curriculum

Since the new course and curriculum was launch in 2012, the number of students sitting the Computer Science GCSE in England, Wales, Scotland and Northern Ireland has steadily increased; from 16,773 students in its first year of assessment (2014) to 78,459 in 2020.

However, this still only represents about 1.4% of all GCSE’s sat.

It is however currently the fourth most sat STEM subject at GCSE level, following Mathematics, Science (including the Double Award) and Physics, and it is also more popular that the traditional ‘ICT’ GCSE – only 9,345 students in the UK sat this in 2020 down from 111,934 in 2015.

As it stands, the vast majority of students completing the Computer Science GCSE course are male.

However, this figure has seen an increase since 2019, when just 2,790 applications by female students were accepted, showing progress is slowly being made.

Further analysis of new NOMIS data also revealed the number of women currently employed in STEM jobs is still below half in most instances. Men still hold most of the jobs across major STEM-related professions in the UK, with the exception of biological scientists, where the percentage of female employees reaches 52%. In some professions, such as IT engineering, the percentage of women employees is as low as 3%, meaning only one in 33 employees in this sector is female.

STEM professions with the lowest percentage of female employees:

The research shows the industry’s united drive to engage young people in computing careers is slowly paying off. However, more needs to be done to encourage young girls to pursue STEM careers.

While female student numbers are low, those that do engage with this subject are typically doing very well. According to GCSE results data from the Joint Council for Qualifications, more female students have been consistently achieving higher grades in the Computer Science GCSE than their male counterparts. In 2020, two in five (41%) of the female students that sat this were awarded a grade of 7+, equivalent to an A or A* in the previous grading system, while this was the case for just under a third (32%) of male students.

This pattern of excellent has been consistent since the curriculum’s implementation in 2014 and is also reflected in other STEM subjects such as Biology, Chemistry, Engineering, Science and Physics. In the past decade, the only STEM subject in which more male students have consistently earned higher grades than their female counterparts was Mathematics.

Computer Science GCSE attendance has grown by 367% since the curriculum’s implementation, and UCAS accepted applications for Computer Science courses have risen by 49% since 2011, with figures increasing from 13,405 to 20,035 in 2020.

But despite the number of Computer Science students at GCSE and higher education level steadily on the rise, it appears supply for skills still isn’t meeting demand in the ever-growing UK tech sector.

According to job vacancies data from Adzuna, the Covid-19 pandemic hasn’t held back the UK tech sector. The number of advertised tech-related roles slightly dipped in April 2020, at the beginning of the pandemic, but has already recovered and is back to pre-Covid levels. In some instances, demand for jobs requiring computer science related skills is at near-record level.

On average, advertised salaries for some of the most common computer science careers are considerably higher than average too, standing at £42,023 at the start of April 2021, versus the £35,444 of the general UK average.

Computer science graduates can earn a considerable amount more than candidates at the same level in different sectors too. According to Adzuna data, the average prospect salary for a graduate software engineer jobs is £48,787, which is £20,000+ more than a marketing graduate (£26,454), Paralegal (£22,803) or teaching assistant (£19,802).

This has also grown over time. The average salary for this position started at £25,383 in 2016, suggesting that as opportunities in the sector have grown so has the salary.

A skills shortage could have pushed businesses to raise their salary offers to attract talent. The same can be said for many other roles that typically require computer science skills, such as a web designer, software developer and data analyst.

Julia Adamson, Director of Education at BCS, the Chartered Institute for IT, said “Computing provides great career opportunities to young people. We’ve seen increasing numbers studying it; including a 400% increase in students choosing AI degrees, as well as more teachers developing the subject knowledge and expertise to deliver an inspiring curriculum thanks to the support of the National Centre for Computing Education, launched in 2018. Great progress has been made, but more needs to be done, especially to encourage more girls and those from under-represented groups”

“The last few months have seen a surge in hiring for Tech and Digital roles, with the sector taking on staff at near-record volumes. Software Developers are in particular demand, accounting for over 1 in 100 of all the job ads currently on offer within the UK. There are also over five thousand Web Designer and Data Analyst roles lying open. The tough ask for employers is finding the skilled talent to meet this growing need. We urgently need to focus on upskilling and retraining the workforce into Computer Science-related roles to serve the swelling Tech sector and support even more future job creation.”

But high salary offers could still not be enough to attract female talent. According to a recent Kaspersky report on Women in Tech, 38% of women claim a lack of female representation in the sector makes them wary of entering the industry. Furthermore, just one in three (33%) women in a tech role were encouraged to learn IT skills at their school, college or university.

Nicki Young, President of OKdo added: “Our research highlights just how important it is that the number of students studying computer science at GCSE and beyond – and choosing this as a career – continues to gain momentum. The tech industry has been reliably growing, and there is high demand for talented people with this specific skill set.

“I hold a computer science degree and know from experience that even at an entry-level, those coming into computer science roles are required to have a solid foundation of knowledge and expertise that is typically acquired through education. This in turn is reflected in the high entry-level salaries. Getting more young students engaged in this subject early on will be key to enabling this industry’s continued growth, alongside the retraining of people looking for a fresh challenge in a thriving sector.

“Progress has been made, but there is more work to do to really engage the tech talent of tomorrow. A Data Analyst, a Software Developer, a Web Designer – these should be aspired careers. This is particularly important amongst female students who are still studying STEM subjects in low numbers but have proven themselves to be highly capable; typically achieving higher grades than male students. I have led a large technology outfit with 100s of members, as a result, I have been fortunate to have worked with some incredible women in tech, but there are still too few, and it is something I have always been passionate about addressing. What attracts young women into a career in tech may be different in some instances from what appeals to male candidates, with the Kaspersky report implying that visibility of the positive societal impact of IT careers is more likely to attract women into the industry than a higher salary. “

“We all have a responsibility to do more to showcase role models women in Technology and all areas of STEM to inspire the next generation.”

Do you want to get started with coding?

Visit our Project Hub for inspiring guides that show you how to build and program cool NVIDIA, Raspberry Pi, and Arduino projects using a variety of popular boards, kits, and tools.

If you are just starting out with Raspberry Pi, Arduino or another popular platform or tool, our getting started guides can help you do just that.

The Ultimate Guide to Raspberry Pi 400