Are you looking for the best IoT development board & platform? We know that there are a lot available to choose from, so we would like to tell you about our new partnership with Atmosphere and their award-winning cloud-based IoT application enablement platform. So that you can decide if it the one for you. If you have used the IoT cloud platform, let us know what you think in the comments section.

What is an IoT cloud platform?

The development of affordable and simple mass produced sensors, radios and processors is enabling the explosion and advancement of the internet of things (IoT). IoT is everywhere now and more companies and consumers are invested in smart devices. Creating a huge opportunity for developers and future IoT devices to connect ANYTHING.

An IoT cloud platform is the software environment in which developers can build manage and connect their IoT applications. Whether it is embedded, mobile or web development, a platform can be used to create any required IoT application. A cloud platform collects and sends data to the cloud and provides this data in the platform so that the devices can be easily managed.

OKdo customers can now use the platform with our E1 board

Our own OKdo E1 Development Board, based on the NXP LPC5569 MCU, is now a supported device within the Atmosphere IoT Studio, which means it can be programmed by now anyone who would like to take advantage of Atmosphere’s drag and drop library of compatible peripheral items, including sensors and wireless modems. Within minutes, you can create custom firmware, a mobile application, and a cloud application. 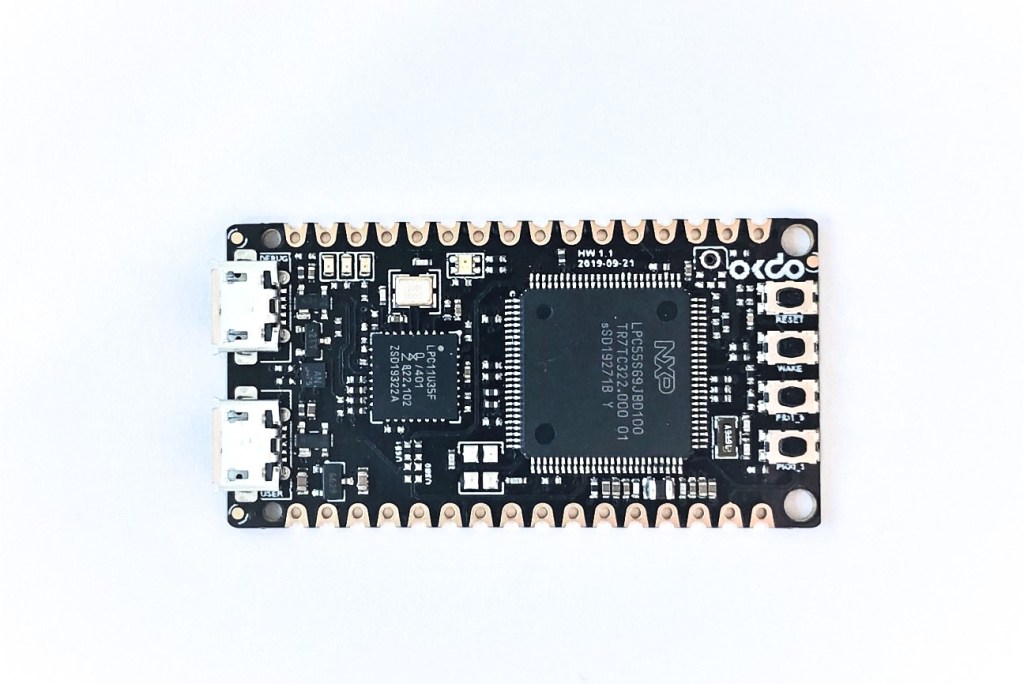 The OKdo E1 is an ultra-low-cost Development Board based on the NXP LPC55S69JBD100 dual-core Arm Cortex® M33 microcontroller. The E1 board is perfect for Industrial IoT, building control and automation, consumer electronics, general embedded and secure applications.

Advantages of the Atmosphere IoT Studio

When you are looking for an IoT solution, you want a platform that is going to solve the complexities you face in building an IoT application. That is why we love the Atmosphere IoT studio and we chose to partner with them.

The Atmosphere IoT studio is a cloud-based low code IDE where you can go from idea to prototype in minutes. You do not need to be an IoT expert to use the platform. The studio has a visual editor interface that uses drag and drop when developing which makes it so easy to use with visual logic to run in the cloud.

It is an all-in-one platform, allowing you to manage embedded, mobile, and cloud development. When developing mobile applications, you can even develop the app at the same time. Amazing.

It is also compatible with existing developer tools. You can get access instantly to your project’s data with dashboards being set up straight away.

Bring power & simplicity to your cloud projects with ease.

How does the Atmosphere IoT platform work?

Atmosphere have created a series of videos introducing the Atmosphere IoT Platform, watch the video below to see how the platform works.

Ready to try the platform?

Grab your E1 board as we demonstrate the platform capabilities in the project below to build a sensor network to the cloud using Atmosphere IoT Studio visual editor to monitor the weather.